Fortunately, I was granted to opportunity to attend Airborne School for three weeks during June and July of summer 2008. The 5 days before training were very nerve-racking as all the females on the floor of the barracks worried if we could keep up with the males and if pull ups would be a problem. But soon, we found that we had prepared well, mostly because we didn’t want to lose the respect of fellow students or instructor…being female, and a Charlie (aka Cadet). 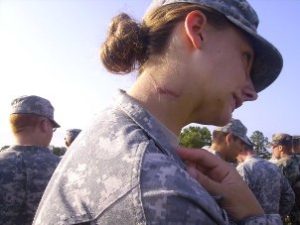 Training started Monday morning with a pt test bright and early. As long as you passed, we started right in with parachute orientation after breakfast. Ground week included how to exit the mock door, practiced parachute landing falls (PLFs), exited the 34-foot tower, and trained on the lateral drift apparatus (LDA). The 34-foot tower helped many overcome fear of heights, and if not, at least you knew to jump right out so you could avoid being booted out by a Sergeant Airborne. Should you hesitate and get booted? Don’t scream like a girl as you’re shoved out the door like the female cadet in front of me…though hilarious, she definitely got made fun of by the guys! They are really good at teaching you how to fall down, the strains in my neck and bruised up body could vouch for that. Though it is monotonous, it is important training because we still had yahoos in our company that snapped ankles and such during Jump Week.

The second week, Tower Week, is a little more exciting since we moved away from doing PLFs all day. We learned more about the teamwork it requires for exiting an aircraft properly. Training done this week was done on the 34-foot tower, the swing landing trainer (SLT), the mock door for mass exit training, the suspended harness, and your class could potentially train on the 250-foot free tower, but ours unfortunately (or fortunately?) didn’t have time since we got a 4-day weekend for the 4th of July (The patriotism and fireworks on an Army post were pretty amazing!).

The last week of training, Jump Week, began with a double time jog down to the harness shed every day where we conducted pre-jump training (lots of review), ate breakfast, and got into our harnesses and to await our turn to jump. You can sit in your harness for up to 5 or even 8 hours depending on how well things are running. During the hours spent in the harness shed, our chalk grew very close as we talked about anything and everything and played the name game, color game, movie game…every game you can think so we didn’t fall asleep.

You complete 5 jumps throughout the week. If as lucky as me, you get to face your fear of heights head on…literally. I was first out the door my first jump. I was trembling as I inched my way to the door and watched the horizon but couldn’t help seeing the ground pass below me. As soon as the jump master gave me the swat on the butt and yelled “GO!” I jumped with all my strength and soon my chute was open and adrenaline was rushing. I was in AWE! I then realized I had to use all the training we had been doing the last 2 weeks. It was all over in about 30 seconds, but I’ll never forget the way the first jump felt!
My last jump wasn’t as flawless as I was involved in a high altitude entanglement. It was our night jump and I heard a voice in my canopy, and it hit me. Oh great…we we’re tangled. We were yelling and using every word in the book and as we tried to use the training we had for this situation. It didn’t work so we panicked and pulled our reserve. Soon we hit the ground and the Sergeant Airborne was laughing at us for all the commotion on a silent night and pulling the reserve too late. It was funny once we knew we were ok, and we died laughing. Makes for a good story anyway. 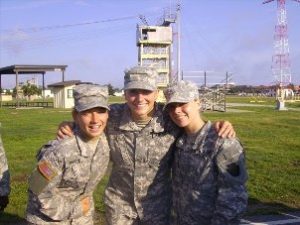 Overall, Airborne School was exhausting with the hours spent training and the early mornings. PT was a challenge, but since I was in decent shape, I had no problems getting through. I was able to see how life is on an Army post and learned from so many different influential individuals. I learned how things are from the perspective of privates, learned much from different officers as they told me of their different experiences as a 2LT and thereafter, learned about other services, made some amazing friends with fellow cadets, learned more self-discipline, felt how HOT Georgia can get, and laughed more with these friends than I did all summer. I am still in touch with some awesome friends today at different universities and even got to see a few of them at LDAC this summer. Overall, I was surrounded by people from all military backgrounds, including different countries, different services, and different ranks. It was great working with this diversity as I feel it will make me a better officer some day. I will be more aware of their different perspectives and concerns. Study hard, get the PT scores up, and volunteer for extra-curricular activities to get some class OML points and hopefully some day you can experience this awesome training opportunity, but even more so, a great life experience.