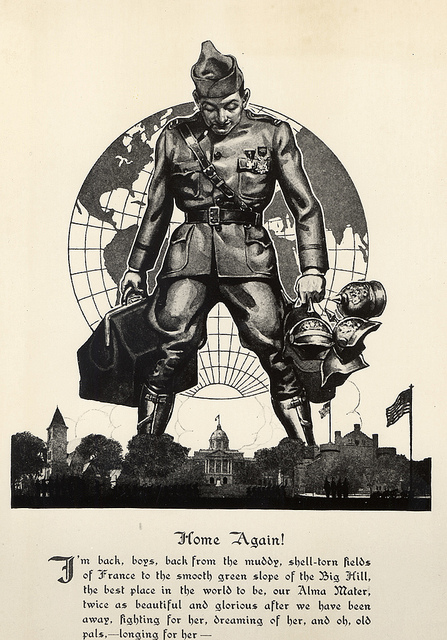 The University of Wisconsin – Madison ROTC Battalion has been proud to help develop the leaders of tomorrow.

The Unit Motto: “Truth and Liberty”

The Battalion Motto of “Truth & Liberty” comes from the specific uniqueness of this organization and its history and traditions.

“Truth” is taken from the ‘most famous words’ in University of Wisconsin – Madison history. These words have become synonymous with the university’s reason for existence, and are inscribed on a plaque outside Bascom Hall. The author is believed to be Charles K. Adams, President of the University from 1892 to 1901. His words are: “Whatever may be the limitations which trammel inquiry elsewhere, we believe that the great state University of Wisconsin should ever encourage that continual and fearless sifting and winnowing by which alone the truth can be found.” The word truth refers to the American’s desire and endeavor to find, through lifelong scholastics and learning, a better existence through understanding and appreciation.

“Liberty” is that which Cadets have committed to serve, protect, and enable. The Army ROTC program trains, prepares, and enables Cadets to serve the Nation as Lieutenants for this very purpose. This training began in Madison in 1868 when Colonel William Russell Pease, of the 117th New York Volunteers, was stationed here by the War Department to train the University’s 347 students in Military Tactics and Engineering. During periods of the Civil War and other conflicts world-wide, the students of Wisconsin have continued to sacrifice for the benefit of their countrymen.

The University of Wisconsin continues to produce superior officers for the United States Army. It currently produces officers with its partner school, Edgewood College, and its sister schools, the University of Wisconsin at Whitewater and Maranatha Baptist Bible College. Each school adds to the Badger Battalion in unique ways, creating a stronger program with strong cadets.

Making the best military officers in the world; motivating young people to be better citizens.

The history of UW Army ROTC can be traced to 1858, when a group of enthusiastic young students decided to form a company in order to practice military drill.  Named, “The Light Guards,” students would continue to practice military science until the outbreak of the Civil War, which drained the entirety of the male populace.  Following the end of the Civil War, the University accepted the provisions of the Morril Act of 1862, officially becoming a land grant college and establishing the Department of Military Science. In 1867, the program was further enhanced by the arrival of the university’s first Professor of Military Science, Colonel W R Pease.  Under his guidance, a four-year course of instruction was adopted, an armory constructed, a uniform prescribed, and drills were held three times a week which all male students were required to attend.

In 1875, a physical fitness program was added to the department’s regimen. This would lead to the eventual construction of the iconic Red Gym, which would serve as a combinatory gymnasium and armory. The building consisted of three floors, with basketball courts on the second level.  The cadets would drill on the field across the street.  In 1904, a group of students banded together and formed an honor society for the advanced course cadets.  Known as Scabbard and Blade, this honor society is now a national fraternity, and part of nearly every major military science program.  The University was further honored in 1915, when it was designated a Distinguished College by the War Department.

With the passage of The National Defense Act of 1916 by President Wilson, the program officially known as the Reserve Officers Training Corps was established.  In response to the passage of this act, the Board of Regents of the University applied for the establishment of an Infantry unit of the ROTC at the campus.  In 1917, the War Department accepted the University’s application, with the provision that there be compulsory training for all physically fit male students during their freshman and sophomore years.  Students could then elect to participate in the advance course their junior and senior years, which would lead to a military commission. During World War 1, the University would send thousands of officers to fight in Europe.  In proportion to its size, the University would contribute more to the war effort than any other school in the country. 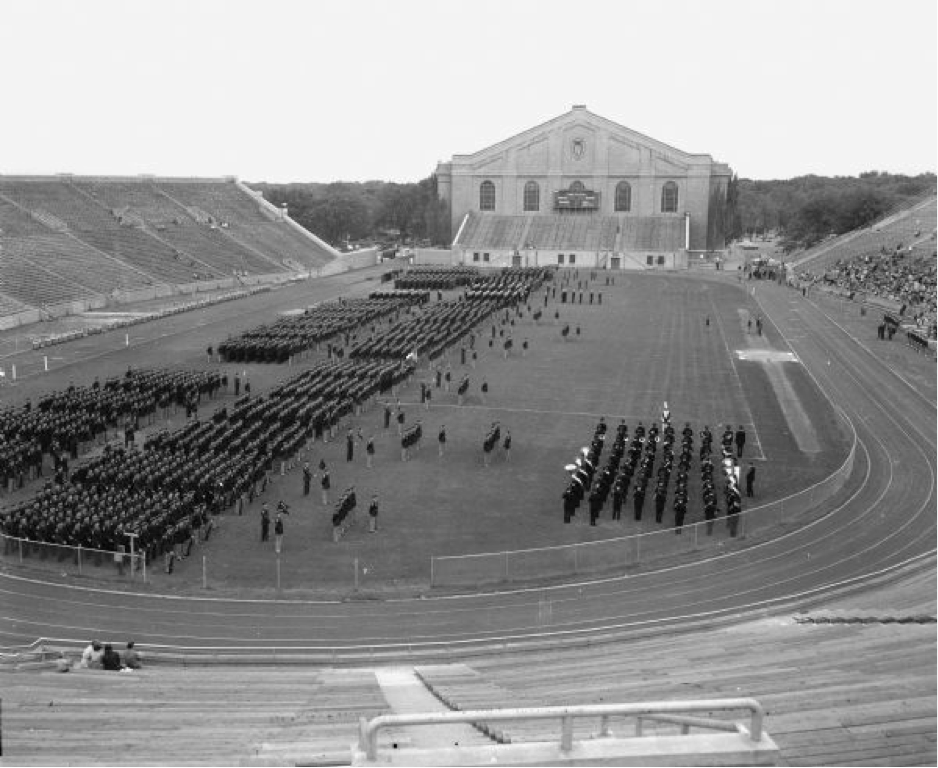 After World War 1, the Department of Military Science would broaden itself considerably.  In addition to the Infantry unit at the University, the Department added Ordnance, Field Artillery, and Signal Corps units.  The prestige of the Military Science Department was enhanced in 1933, when the program gained accreditation by the University.  From this point onward, students gained one academic credit per semester of participation in the program.  The program continued to grow, and in 1935, an Infantry regiment was formed on the campus, consisting of three battalions, each with four companies.  Senior cadets formed the officer personnel, and juniors and sophomores comprised the NCO ranks. An engineering unit was also established in 1935.

In 1940, on the brink of the Second World War, peacetime conscription led to a ballooning of the program. As the threat of war grew ever greater, the state legislature passed a bill which would again make ROTC compulsory for all students, a legacy which would last until the after the Vietnam War.  After the entry the United States into World War 2, the ROTC program at the University was temporarily suspended, as all available manpower was funneled towards the war effort.  The end of the war and the return of veterans to the University would see the reestablishment of ROTC, as well as the addition of new units: the Air Corps, Transportation Corps, Quartermaster Corps, Medical Corps, and Military Police. The program would remain largely unchanged until the events of the Vietnam War in the 1960s and 70s.

The period during the Vietnam War would see increased opposition to ROTC at the University, mostly to the policy of compulsory military training.  In response to this the program established new orientation programs, as well as additional scholarships and increased pay for cadets. This, however, did little to ease the tension on campus over the University’s implicit support of the war.  The Red Gym, home to the all three ROTC programs, was subject to frequent vandalism and arson.  Passions reached a boiling point in 1970 with the bombing of Sterling Hall, which killed one and injured three. This led to the ROTC programs being moved to separate buildings, and the end of compulsory military training at the University.

In 1973, the declining anti-war pressures on campus led to an increase in ROTC enrollment. ROTC ranks also were opened to women that year, but they couldn’t be required to take any weapons instruction. By 1975, females were eligible for attendance at the basic camp which stresses leadership development, and is designed to bring students to a level of military training and education that qualifies them for enrollment in the advanced senior ROTC program. When the Army switched over to a voluntary system instead of the draft, more recruiting funds were made available. At the end of the school year in 1976, Sue Ann Tiller was the first female to graduate from the UW-Madison ROTC program. About two years later, Geralyn Nicpon became the first woman to head the UW Army ROTC contingent.

In the 1980s through the first decade of the 2000s, the Army ROTC program continued to develop future leaders on campus. During this time the Badger Battalion moved to a few different buildings on campus until finding its current home at 1910 Linden Drive at the beginning of the year 2000. It was shortly after the move that the nation was attacked on September 11th, 2001 and found itself at war. Since the terrorist attacks on 9/11, the Badger Battalion commissioned over 1,000 officers, with many serving in leadership positions during Operation Enduring Freedom in Afghanistan, Operation Iraqi Freedom in Iraq, Operation New Dawn in Iraq and Syria, as well as countless other military operations and training exercises around the globe.

Today, Army ROTC is considered one of the top leadership programs in the country. The leadership classes prepare Cadets with the tools, training, and experiences to succeed in a competitive world.