This summer I was selected to attend the Sabalauski Air Assault School located at Ft. Campbell in Kentucky. Air Assault School is a 10-day course designed to prepare Soldiers for insertion, evacuation, and pathfinder missions utilizing helicopters. Air Assault training focuses on the mastery of rappelling techniques and sling load procedures, skills that involve intense concentration and a commitment to safety and preparation.
Air Assault is broken into three phases and a Day Zero. On Day Zero, participants undergo intense physical exercise and must successfully complete an Air Assault Obstacle Course. The following morning we completed a 6 mile ruck march with 50 lb packs and then had an intense gear inspection to ensure that everything was perfectly up to standard. Failure to complete any event to standard or meet the standards of the inspection resulted in being dropped from the course.
Next was Combat Assault Phase. In this phase we learned the principles Aircraft safety and control along with the fundamentals of both pathfinder and air assault operations. The next phase was sling load operations. Here we learned how to rig and inspect sling loads on rotary wing aircraft, an operation that generally requires the loading Soldier to hook a load to the underbelly of a helicopter hovering within arms reach above them. To put sling loading in perspective, the maximum cargo load for a UH-60 Blackhawk was 9,000 lbs and a CH-47 Chinook was 26,000 lbs. This operation is extremely precise, and requires intense preparation and concentration from all Air Assault candidates. In order to pass this phase all soldiers had to pass a difficult hands on and written test. Lastly, we entered Rappelling Phase. Here we learned the principles of rappelling and fast roping on a tower in full combat gear before culminating our training by rappelling out of a helicopter.
Lastly, all remaining soldiers who passed all 3 phases woke up at 1:30 AM on graduation day and completed a 12 mile foot march with a 50 lbs. ruck sack in less than 3 hours. Upon completion there was one last gear inspection and upon passing both graduation. Of the 300 soldiers who started with me, only 110 graduated. Air Assault School was without a doubt the highlight as my time as a Cadet so far and I would highly recommend it to anyone with the chance.” 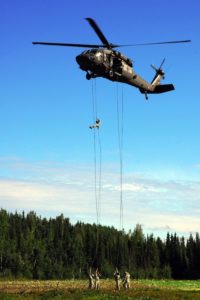