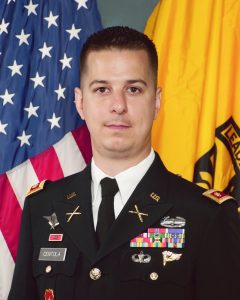 Upon completion of the Officer Basic Course, MAJ Centola was stationed at Schofield Barracks, HI as a Fire Support Officer for C/2-35IN, and later a Battery Fire Direction Officer and Executive Officer for A/3-7FA, 3rd Brigade , 25th ID, deploying once in support of Operation Iraqi Freedom (OIF).

Once complete with the Captains Career Course, MAJ Centola was assigned to 4th Striker Brigade Combat Team, 2nd ID, at Joint Base Lewis McChord (JBLM), WA, where he served as an Assistant S-3 in 2-12FA, the Fire Support Officer for 2-23IN, and culminated his time at JBLM commanding two companies in 4-9IN. During his time in 4-2 SBCT, MAJ Centola deployed once more in support of Iraqi Freedom as part of the “Last Combat Brigade”. He departed JBLM in 2013 and was assigned as an Observer/Coach/Trainer for the Fire Support Division at the Joint Readiness Training Center at Fort Polk, Louisiana.

MAJ Centola most recently served in Grafenwoehr, Germany after graduating the Army Command and General Staff College at Fort Leavenworth, KS. While in Germany MAJ Centola was the Deputy G3, Chief of Training for 7th Army Training Command, Battalion Executive Officer and Battalion S3 for 4-319 AFAR, 173rd IBCT(A). During the summer of 2019 MAJ Centola became an Assistant Professor of Military Science and Executive Officer for the University of Wisconsin – Madison’s Army ROTC program.

MAJ Centola holds a BA in Political Science from the University of Minnesota, a MA in Higher Education Administration from the University of Louisville, and a MS in Organizational Development from Capella University. He is married to his wife Stephanie and they have two children, Joshua and Lillian as well as two beagles: Cobalt and Nickel.