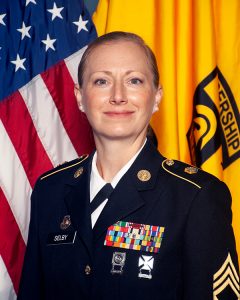 Sergeant First Class (SFC) Corrie Selby began her military career in 2001 as an 88M Truckdriver, assigned to Co A 132nd BSB. SFC Selby deployed to Iraq with the Oshkosh, WI 1157th Transportation Company from 2006-2007, in support of Operation Iraqi Freedom (OIF). In February of 2008, she transitioned military occupational specialties and began serving as an Active Guard Soldier in Jefferson County, Wisconsin as a Recruiter and Retention NCO. In 2014, she became the Unit Readiness NCO for A Co 132nd. Beginning in 2017, SFC Selby returned to the Recruiting and Retention Battalion to serve in the Alpha Company Readiness NCO position. She has also served in as the Operations NCO and Team Leader in Recruiting and Retention. In October 2021, SFC Selby became a Military Science Instructor and National Guard Liaison at the University of Wisconsin – Whitewater.