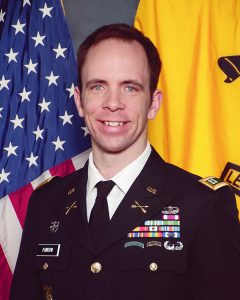 MAJ Pankow graduated from The University of Wisconsin – Oshkosh in 2008 and was commissioned through ROTC as a Chemical Officer.  He holds a Bachelor of Arts in African Studies.

MAJ Pankow is married to the former Kirsten Decker from Fond du Lac, WI. They have five children and live in Deerfield, WI.